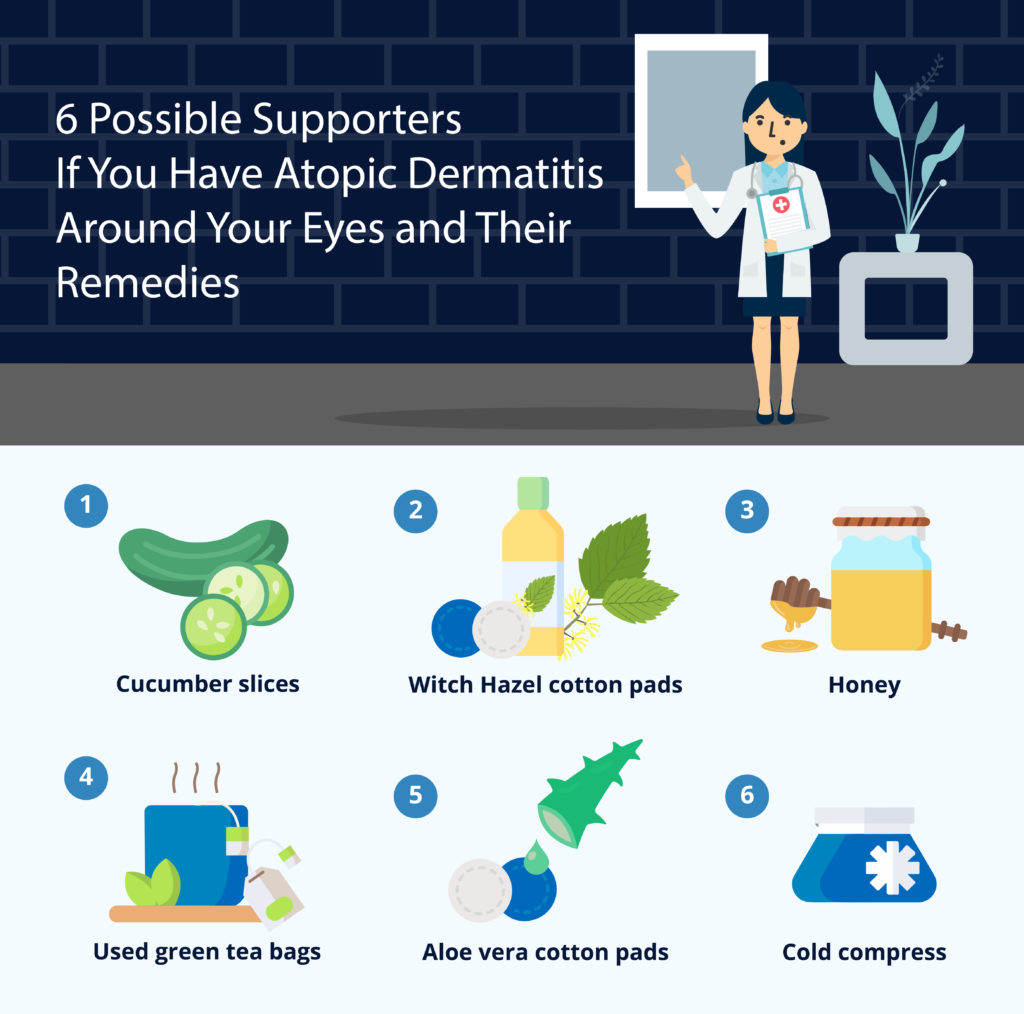 Having atopic dermatitis around the eyes is more sensitive compared to other parts of the body. This is because the eye itself can also become affected which might lead to complications and eventually to visual impairment.

If you think you have atopic dermatitis around your eyes, look closely in the mirror for these changes in appearance:

Once you notice the symptoms, you can go to your dermatologist for a proper checkup to prevent you from going to the ophthalmologist for these possible complications if not treated early:

Too much rubbing of the itching atopic dermatitis around your eyes can lead to keratoconus or deformed cornea. It is a progressive eye disease where the round cornea begins to thin and bulge outward into a cone shape. This deformity in the cornea can deflect light and eventually cause blurry and distorted vision.

You can put cucumber slices on your closed eyes to soothe skin irritations and reduce swelling. It has antioxidants and cooling effects to ease the itching.

Witch hazel contains anti-inflammatory properties to relieve itching and inflammation. Put some witch hazel extract on cotton pads and place them on your eyelids.

Patients with atopic dermatitis around their eyes can suffer from retinal detachment. This is a condition in which the retina becomes separated from its tissue. The most common symptom is retinal tears. This happens when you rub your eyes too much when itching. Intense rubbing around the eyes and the eye itself can lead to optical trauma breaking the retina, and eventually detaching.

Raw and organic honey has anti-inflammatory and soothing properties. It is considered a therapeutic agent and used for treating eye diseases. Apply it under your eyelids and leave it for 20 minutes.

Conjunctivitis is more commonly known as pink eye. It is the inflammation or infection of the transparent membrane barrier that covers the white part of your eyeball. The white part of the eyes becomes reddish or pink. Symptoms include pain, itching, and eye discharge. Atopic dermatitis around the eyes is similar to conjunctivitis in a way that the protective barriers are impaired.

The natural chemicals in green tea improve surface inflammation in the eyes. It provides relief from itchy and dry eyes. Refrigerate used tea bags and then place them on your eyelids.

Blepharitis is associated with atopic dermatitis around the eyes because of its similarity with dryness. It causes flaky skin around the edge of the eyes, as well as flaking and crusting around the eyelashes. Aside from these, the eyes can be red and might feel grainy. It can be very itchy and swollen which is more prone to infection. Eyelashes can even fall out.

Aloe vera helps in soothing eye inflammation. It helps relieve symptoms associated with itchy eyes. Take some aloe vera extract and turn it into juice. Refrigerate and then soak cotton balls which you can place on your closed eyes.

Keratoconjunctivitis is the inflammation of the cornea and conjunctiva. For people with atopic dermatitis around their eyes, it is called atopic keratoconjunctivitis or AKC. The most common symptom is intense itching of the conjunctiva, eyelids, and the skin around the eye socket. Tears, burning sensation, photophobia, and blurred vision are also experienced.

The use of ice packs helps soothe itching and irritation in the eyes. Put a cold compress on your eyes to prevent it from itching.

Always remember that the eye is a sensitive area so some items that you use for a different part of your body may not work or might be too harsh for atopic dermatitis around your eyes. It can get inside your eyes which will cause more harm. There are certain creams or other topical medications that cannot be used around this area.

These are just some of the possible complications of atopic dermatitis around your eyes is not treated sooner or if you keep scratching this area. Most of the items on the list result from scratching so keep fingernails short to avoid injuries. In any case, avoid rubbing your eyes altogether to prevent any of these from happening.

The best way to prevent these complications is to consult your doctor to be able to receive a proper diagnosis and treatment plan. When any of these appear, your skin doctor might recommend a treatment from an ophthalmologist. Atopic dermatitis around the eyes can be difficult to manage but with proper care and treatment, you can also be able to protect your eyesight.

You can find out more about which cookies we are using or switch them off in settings.

This website uses cookies so that we can provide you with the best user experience possible. Cookie information is stored in your browser and performs functions such as recognising you when you return to our website and helping our team to understand which sections of the website you find most interesting and useful.

Strictly Necessary Cookie should be enabled at all times so that we can save your preferences for cookie settings.

If you disable this cookie, we will not be able to save your preferences. This means that every time you visit this website you will need to enable or disable cookies again.